Between work and school Syracuse senior Daniel Goldberg is off an running with two successful ventures, Golden Gear a handcrafted athletic gear company and Diamond MMA a sporting equipment company.

As an information management major in the School of Information Studies, Goldberg has spent many hours developing his signature line of hand-crafted protective athletic gear stemming back to his days as a competitive Muay Thai fighter. Although it can be difficult balancing school and startups, Goldberg stands strong finding time to devote his energy to both.
“It is vital to continue to work until the business is done,” Goldberg says, “that is how a person can really take something to the next level.” Since founding Golden Gear in 2009, Goldberg has managed to grow the business from a duffle bag to a full line of protective athletic gear that includes shin pads, head gear, gloves, and sells to more than 20 retail shops and 8 websites online. He has built the business with a passion for sport and competition.
“As a young fighter I was frustrated that the gear I was training with wouldn’t keep up with my workouts,” Goldberg said. From this experience he took it upon himself to create a high performance product that could be used by both amateurs and professionals. Currently the products are custom made in Thailand and experienced professionals have been flocking to get a piece of the Golden Gear. “I had people saying that my gloves were better, so I kept at it.” 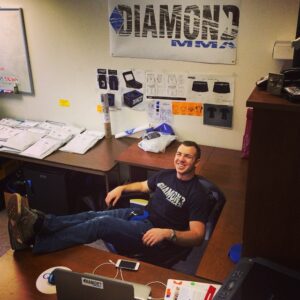 Professional boxers have not been the only people to recognize Golden Gear, in 2014 Goldberg made Inc Magazine’s list of Coolest College Startups and most recently he has was selected to represent the United States in the EO Global Student Entrepreneur contest in Washington D.C. this upcoming April.”I always try and visualize the business, after all business is a sport.”
Today Golden Gear turns a profit yet, even with this success Golderg is still hungry for more. He joined the team for Diamond MMA with the same goal of protecting athletes that participate in high impact sports. “I became a partner with Diamond in 2011, and the relationship since then has grown,” Goldberg explained. After graduation this year Goldberg will be moving to Chicago to help Diamond MMA grow.
“After graduation I really see Golden Gear and Diamond growing side by side,” Goldberg noted. “In a few years I truly think both brands will be all over the U.S. then it will be time to go international.”  He attributes much of his success to his mentors and professors that he has had along the way. “Without the support of Syracuse, my friends and family, I would be a long way from where I am today.” And with a new Golden Gear platform on the horizon Goldberg is as amped as ever. “Think Nike ID, but strictly for boxing equipment.”
Even though balance might not exist when growing a booming business in college Daniel Goldberg is paving an inspirational path to guide other students towards entrepreneurship. “Just do it,” says Goldberg, “worst case it doesn’t work out and you try again.” As Goldberg notes you control your own path to truly improve peoples lives. “Set goals and you will see the fruits of your labor.”
Categories
People
Tagged
syracuse
0