We’ve all been there. It’s Friday night and we are getting ready to go out with a bunch of friends. The girls down the hall are taking forever to get ready, and the guys are growing impatient. To try and pass time the guys create an unnamed drinking game that involves a chair, a soccer ball, a pack of cards, and plastic swords.Right as “The Game” is about to begin the girls burst out from their room down the hall in scantily clad clothes and shout that it’s time to go. The group then collectively leaves the dorm to make memories together and enjoy what many say is the best time in a young persons life.

To capture these moments students are no longer using Facebook, Instagram, or even Snapchat, but a new app that aims to celebrate and share stories from campuses called Yeti. Yeti, is a new picture sharing app where students can anonymously share moments of things happening around them. Each post is submitted to a campus feed, where admins determine whether or not it is approved to the larger board. The easy-to-use interface doesn’t require users to create a profile, and instead allows the people to choose the college closest to them based on location. “We aim to connect students to the larger campus community,” says Ben Kaplan a member of the Yeti team a former founder of WiGo. 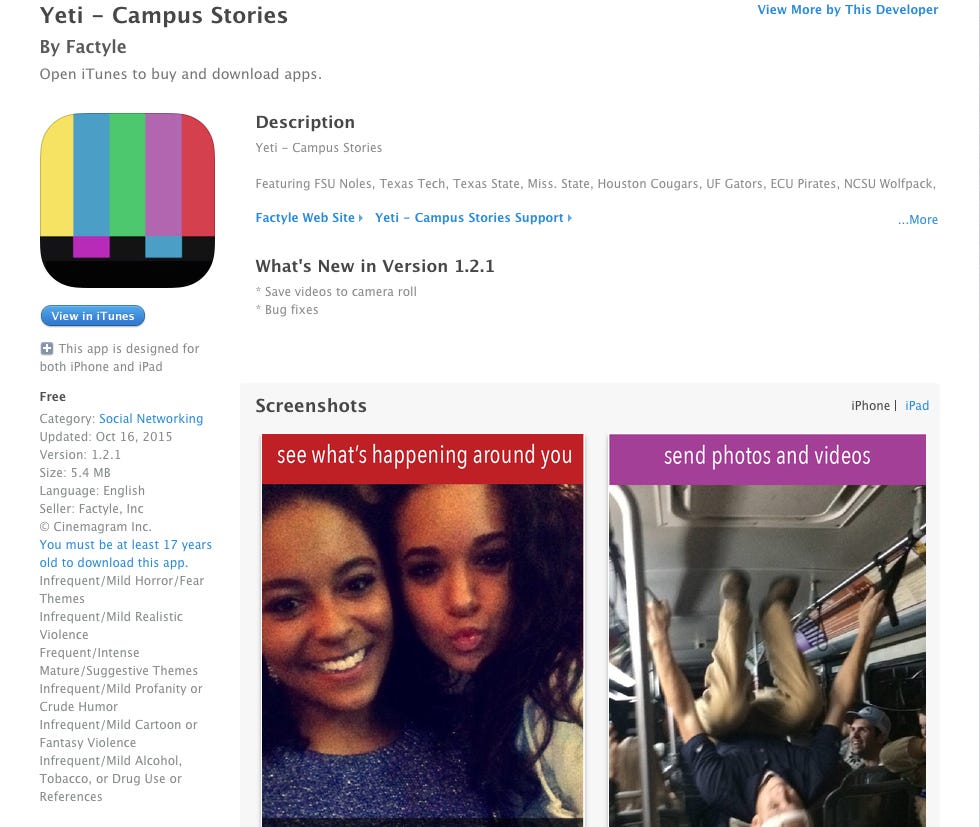 WiGo and Yeti strategically merged earlier this summer as both were building social networks at specific schools. Yeti shows many students what it is actually like attending that school, from the jokes, to the parties, to game day festivities, it shows a side that you definitely can’t get from a campus tour. This first-person perspective is definitely one of the characteristics that makes the app successful, you feel like you are a part of the college you’re viewing. “Yeti is a live feed of EVERYTHING happening on campus,” Kaplan says.

Since the merger, Yeti has become one of the fastest growing apps in the App Store. By first rolling out at large state schools it was able to attract a large and active user base. “At some campuses we have over 70% of the student bodies using the app every single day,” Kaplan noted. Yeti’s growth is attracting serious interest from investment groups, with several existing investors from WiGo rolling up their equity into Yeti the young company is on the verge of a considerable valuation. “It made sense to combine our user bases and reach a larger audience to accomplish our goals.”

If there is one thing that college students love it’s making memories and sharing them with friends on social media. Yeti, gives college students the ability to do that and connect with a larger campus community. People don’t hold back on the app, and each feed has a unique campus story that can be viewed and experienced. “It’s a different way to see what is going on around you,” Kaplan explains, “and our young, scrappy team is excited to see what the future holds.” Yeti has begun to slowly move it’s way up the East Coast, so check it out if you are curious if there is a feed near you. Like the group that went out earlier, living in the moment and creating stories is one of the best parts of the college experience, and Yeti is there to help you capture it all.

There are no comments